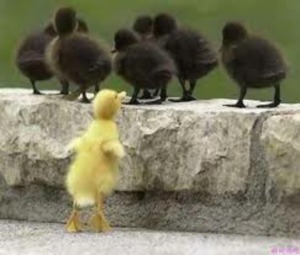 You may be expecting this post to veer into a diatribe against modesty standards, but it will not. Organized groups of people may establish any model for appearance that they desire, and individuals may choose to follow those standards or not. The problem I wish to address isn’t the LDS dress code, but the predictable waste product that occurs when it is exalted as a measure of individual worthiness. When we conflate signifiers of tribal compliance with submission to God, we create a false God, one who looks upon the outer man rather than upon the heart. When we bring these codes into our chapels and church auxiliaries, our worship often becomes misdirected; the goal becomes the outward manifestation of the degree to which we are like one another, rather than an inward reflection of our progress to become like God.

Last week, Kim B. Clark, president of BYU-Idaho, sent a message to his student population that pivots on this false teaching. What he wrote was staid and typical, but also jaw-dropping because few outside Rexburg, Idaho (or the Middle East) would consider it immodest to wear pants hemmed four inches above the ankle. He justifies his public rebuke of students who violate the BYU-I dress code (specifically by wearing shorts outside the gym area, or not shaving well that morning, or wearing anything but ankle-hiding attire) this way:

“You may wonder why the president of BYU-Idaho would spend time on these small things. Here is the reason: The dress and grooming standards are one of those small things on which big things depend. Obedience in the small things creates a spirit of obedience in all things. And obedience brings the blessings of heaven, to you individually and to the whole campus community.”

I’ll give Clark a pass for not qualifying that obedience to God brings the blessings of heaven, because I think his intent is clear. However, I will not give him a pass for equating the rules of the community with the commandments of God, nor on his implication that a student’s submission to God is dependent upon his or her living community rules. He would have spoken more accurately if he had said, “Obedience in the small things creates an illusion of obedience in all things.” Have you heard the story about the buttoned-up, clean-shaven Sunday School teacher who had an affair with his hygienist and left his wife and six children heartbroken? Because it’s happened over and over and over in one form or another. The small things of the community are not the foundation for the gospel.

Some may argue that the church’s dress standards are inspired by God. Fine. But God’s commandments aren’t inspiration: they are eternal law, irrevocably decreed. If the dress standard were eternal law, we’d expect the Lord’s church to apply it universally. The reality that dress standards have changed over time and vary between church universities demonstrates that BYU-I’s dress code is little more than a tribal custom. Teaching that obedience to God’s commandments is based on obedience to cultural rules exalts the tribe, but degrades both God and his children by shifting the focus from internal to external.

Over at LDS Living, we saw a different manifestation of the same problem, one I found touching regardless of its misdirection. Here, Jessica Carter issues a heartfelt plea to the church’s membership on behalf of her teenage son, and youth like him who don’t comply with LDS dress and grooming standards. She specifically requests we remain welcoming, understanding, patient, and sincere. She writes, “As a parent of a child who doesn’t fit the ideal Mormon mold [because of his long hair and refusal to wear a tie on Sunday], it is sometimes painful to watch how fellow Church members react to my son’s appearance.” She astutely reminds us that judgmentalism exercised against our young men and women is unlikely to inspire in them a desire to adopt the established norm, something President Clark may need to hear.

However, beneath Carter’s wisdom simmers the very problem she seeks to destroy. She writes, “[P]lease just assume the parents [of children who don’t fit the mold] are doing their best to help their children live the gospel.” The undercurrent of these words suggests that she, like President Clark, sees compliance with the dress and grooming normative as a requirement of gospel living.

Remember that Christ, like Carter’s son, had long hair and bucked against many of the established customs of the faith practice into which he was born. Perhaps it could be argued that, if we measure God himself against the LDS mold, even God fails. I suggest there is no evidence more clear that the LDS mold is a false measure of commitment to gospel living than this.

But what interests me most about Carter’s plea is that she asks us not only to refrain from judging children who don’t fit the mold, but also to refrain from judging the parent of that child. Tellingly, she doesn’t feel God’s scorn because her son is long-haired and doesn’t wear a tie to church, but she does feel the disregard of fellow church members. I see in this more evidence that the LDS modesty canon exists to satisfy man, not God, who looks upon the heart.

It also demonstrates how our investment in the dress standard as a measure of devotion to God can alienate even those who strive to comply. Some who feel isolated will cling at the margins, but others let go because they don’t feel wanted, appreciated, or understood, three things our Heavenly Father feels for each of us.

I submit that the dress and grooming standards aren’t the weed that is choking so many of our young people out of the Lord’s garden. Nor is their non-compliance to those standards choking them out. Rather, we are the weed that chokes them with the false teaching that their long hair, rolled cuffs, tattoos, piercings, and exposed shoulders are the small things upon which larger things are dependent; we choke them when we tell them their appearance is the foundation of gospel living. We might as well tell them that a switch plate is the foundation of electricity for all the truth our words reveal.

I am filled with charity, which is everlasting love; wherefore, all children are alike unto me… Moroni 8:17

20 thoughts on “False Measures and the False God: A Problem Born of the LDS Modesty Canon”